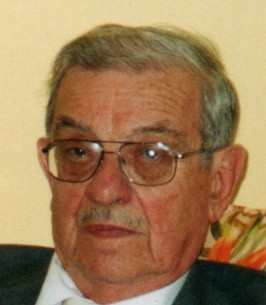 Gerard J. Kester, 101, of Scranton, died peacefully Saturday, April 2.
Gerard was born Oct. 19, 1920, in Scranton, Pa., to Walter and Mary Schneider Kester and was a lifelong member of St. Mary’s of the Assumption, Scranton, Pa., and currently a member of St. John Neumann Catholic Church, Scranton, Pa.
He graduated from Dunmore High School in 1939 and was a technician fourth grade in the United States Army during World War II.
Gerard married his wife of 60 years, Josephine Toton Kester, on Sept. 28, 1946. She preceded him in death in 2006. He started his own business in 1946, Home Mirror and Glass Co., which he operated for 61 years, and was the area expert at re-silvering mirrors. He finally retired at the age of 87, and sold his business.
Gerard had many interests during his life. He hunted and fished, and later became an excellent ballroom dancer. He and his wife took dance lessons for many years. He bowled on various teams for many decades. He loved going to the casinos, horse racing, and investing in the stock market, with an investment strategy that “we’re in it for the long haul.” And he loved watching Fox News, baseball and golf on TV.
He felt his secret to longevity was not getting stressed about things. His five daughters felt his secret to his long life is having five devoted daughters!
Surviving are five daughters, Carolyn and husband, Edward Grzenda, Atglen; Dianne and husband, David Kalinoski, Clarks Summit; Barbara Lacek, Manheim; Virginia and husband, Michael A. Rescigno, Jessup; and Cheryl and husband, Carlton Kinsey, Dunmore; 11 grandchildren, Christine and husband, Kevin Miller; Edward Grzenda, Krista and husband, Chris Pugliesi; and Kimber Lee and husband, Joseph Polaski; Tommy Lacek; Joseph Lacek and fiancée, Krystina Rothhaar; and Rachel Lacek, Michael G. Rescigno; Stephanie Rescigno and fiancé, Eric Jablonski; Rebecca Kinsey and partner, Jeff Farkas; and Emily Kinsey and partner, Jason Hull; three great-grandchildren, Erin, Leander and Gwyneth; several nieces and nephews.
He was also preceded in death by two brothers, John and Francis Kester; four sisters, Mary Anne Burnakis, Dorothy Beresovoy, Catherine Negra and Theresa Beresovoy; and son-in-law. Thomas Lacek.
The funeral will be Friday at 9 a.m. from the Arthur A. Albini Funeral Home, 1003 Church St., Jessup, with Mass of Christian Burial at 10 a.m. in St. John Neumann Parish at Nativity of Our Lord Church, 633 Orchard St., Scranton, to be celebrated by Monsignor Joseph Quinn. Interment with military honors will follow in SS. Peter and Paul Cemetery, Taylor.
Friends may call Thursday from 5 to 7 p.m. in the funeral home. In lieu of flowers, memorial contributions may be made to St. Joseph’s Center, 2010 Adams Ave., Scranton, PA 18509; or United Cerebral Palsy, 425 Wyoming Ave., Scranton, PA 18503.

All rights reserved. This obituary is also archived at obittree.com